Strategy for the Conservation of the Leopard in the Arabian Peninsula 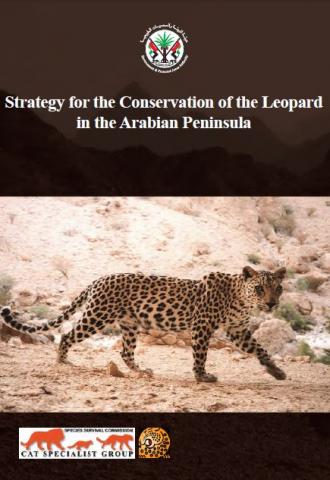 Al nimr al-arabi, the Arabian leopard, is a uniquely small, genetically distinctive, desert-adapted form of the leopard that is endemic to the Arabian Peninsula. It once occurred around the mountainous rim of the Arabian Peninsula, where it preyed on Arabian tahr, Nubian ibex, hyrax and other species that share its habitat. Although widespread, the leopard lived at the top of the ecological food chain in an extreme environment, with low primary productivity. As a result, it must have always existed at low densities and is never likely to have been abundant.
Leopard numbers have fallen much further following their elimination from many areas of former range. It is many years since the leopard was seen in Sharjah Emirate. Now only disused stone leopard traps (margaba) in sites such as Wadi Hilo attest to its earlier presence here. Sadly, the latest evidence indicates that leopards also disappeared from the rest of the United Arab Emirates during the last few years. Small populations now survive only in southern Oman and a few parts of Yemen and Saudi Arabia and the leopard has become one of the scarcest and most highly-threatened species of the fauna of Arabia. The decline of this charismatic animal represents a major loss both for regional biodiversity and for our natural heritage.

Strategy for the Conservation of the Leopard in the Arabian Peninsula