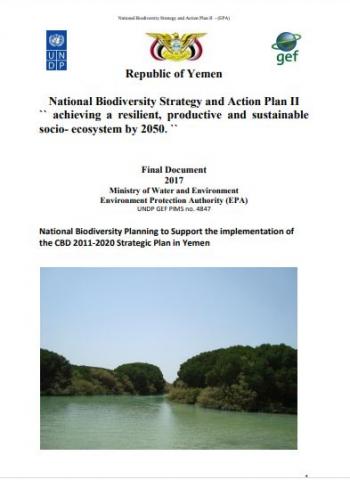 Acknowledgement Executive Summary 1. Key Biodiversity Issues As per Yemen Ecosystem Valuation study, the value of Yemen key ecosystem is estimated to worth approximately USD 287,829 million, which is about ten times the value of GDP(USD 20,000 million per year) if the values of ecosystem products were integrated in the country‟s GDP. Unfortunately, most of the values of ecosystem goods and services such as value of energy from fuel wood, medicinal plants, the medicinal values of forests, animal fodder, water and pollinators. etc are ignored in economic decision making, and thus are not accounted for when estimating GDP and deriving national income accounts. Omitting ecosystem values while estimating GDP and economic decision making is the resultant of low societal awareness on ecosystems values associated with market failures under current policy and economic distortion, legislation inadequacy & institutional and social weaknesses. These factors have also been cited as underlying causes, which interact collectively to result in increased population and high growth rates and widespread poverty and the subsequent production and consumption patterns that are unfavorable to biodiversity conservation, but rather advocating over consumption.